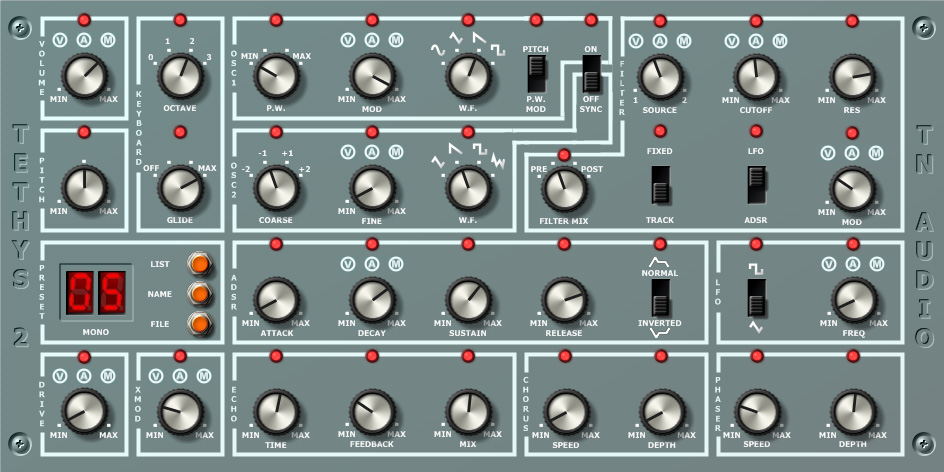 Tethys 2 is based around the architecture of the PAiA Proteus 1 (not the EMU’s expander !).

The effects from right to left are Phaser, Chorus and Echo these are fairly standard but follow the Tethys ethos of keep it simple and therefore have the minimum number of controls needed. Then comes the X Mod the effect of which changes depending on Oscillator 2’s waveform and the knobs setting (should maybe have been called Mod ?) and can sound depending on the settings anything from FM, AM, RM to badly soldered wires randomly distorting the sound. A great companion to the next effect the Drive, it started out as a recreation of an old Washburn SX3 pedal but as I tried to reduce the pedals three knobs to one it took on a character of its own. Its tone is also dependent on the amount of signal being fed to it by the volume knob, so to get the sound you want you may have to turn the volume down and boost it at your mixer.

To take advantage of the range of sounds and interplay these last three knobs had I thought they would be ideal for the Variable Attenuation Matrix or VAM, just click on the symbol for Velocity, After touch or Modulation wheel and use the knob to set the maximum amount and anything less than say full velocity etc will attenuate the control. This worked so well I applied it to several other controls to give a very organic playing experience.