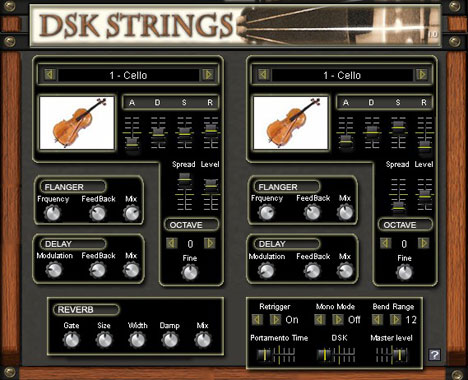 For a free vst plugin, DSK STRINGS has a quite complete instruments. You can have almost all models of strings including the bass sound from a cello with a standard sounds A D S R adjustments.

Common knobs are found too like Flanger with deeper settings knob on frequency, feedback, and Mx. For the delay, you can modify the modulation, freedback, and Mx, while for the reverb you can use more on gate, size, width, Damp, and MX. You can also play more with the Octave for both higher notes and lower notes. These settings are what you will find in the left part of the free vst cello plugins as it is split into two parts.

The next part, which is the right one, is similar in most knobs except that it is equipped with more functionality like Retrigger, Mono mode, and Bend Range. You can also be flexible with the portamento time.

Why do you have to use DSK STRINGS free cello vst plugin?

Technically, I do not make you use this free cello vst plugin because your taste and style of cello like sounds may different from what I like. Plus, in a case of choosing free and paid one, of course may people would agree that paid cello or stings vsts are better than those free.

However, you will always have options and decision on which to use whether spending more money to buy the paid cello vst, or just use the free one like this DSK STRINGS free cello vst plugin.

As for me, music is not always about something expensive. It’s about creativity. For me, this DSK Strings free cello vst is more than enough. The only unfair thing is that it is only for windows users, not free cello vst for mac. The following is to sum up the functionalities offered by DSK STRINGS. Download it and experience decent cello sounds in your electronic music composition.